Joseph Cancellaro is the Chair of Interactive Arts and Media at Columbia College, Chicago. He’s also a composer, film composer, author, and researcher. All his creative credentials made us curious, so we asked him to tell us more about his life and how the Library fits in. 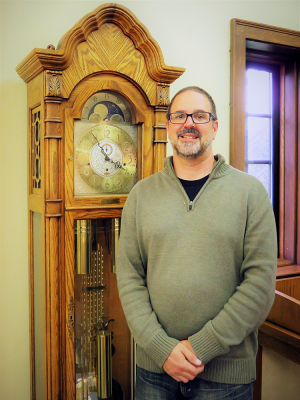 Where were you born and where did you grow up?

I was born in Suffolk County, New York, which is at the east end of Long Island and grew up there until I was 18. Then I went to Boston for college.

Then you received your Bachelor’s of Music degree from Berklee College of Music in composition and film scoring, your Master’s Degree in Composition from the New England Conservatory of Music, followed by your Doctorate in Music Composition from The University of Edinburgh in Scotland. Tell us a little about those academic choices and your experiences at home and abroad.

I was always driven and possessed by music both in performance and composition so I left New York after high school for Boston to study at Berklee College of Music with two great composition teachers, John Bavicchi and Dennis LeCaire. While there I studied piano performance, film scoring, and composition and once I graduated I went to study at the New England Conservatory of Music. There I studied with William Thomas McKinley for two years and had the chance to work with Witold Lutoslawski for a short period as well. NEC was great for meeting world class composers at that time, this would be the early 90’s. I had the chance to meet John Cage, George Russell, Gunther Schuller, and many others. Following this I went abroad to Scotland to study with Nigel Osborne for my Ph.D. in Composition. Consequently, I spent nearly an entire decade living and working in Europe. I wouldn’t trade that experience for anything.

Music, audio, and computers then took you to Poland, to the Poznan Supercomputing and Networking Center, as well as the I.M. Paderewski Poznan Academy of Music in Poznan. In layman’s terms, what were you doing at this time? Were there issues with language?

After I left Scotland I moved to Poznan, Poland which acted as a launching point to travel around and explore much of Europe. While in Poznan I worked with electro-acoustic music, mixing, and recording at the Poznan Supercomputing and Networking Center. I spent five years there working with all sorts great people and technologies. I also taught composition and music theory, for a while, at the Paderewski Academy of Music while in Poznan. Basically, I was working with the construction and implementation of source sounds as music composition and as accompaniment for visual linear media, or movies. This took a combination of music composition, digital signal processing, a bit of digital audio theory, and sound reinforcement installation techniques.

In 2011, you became Chair of Interactive Arts and Media at Columbia College Chicago. CCC is known for its cutting edge programs; give us a behind-the-scenes peek.

Yes, as Chair of IAM, I direct and provide guidance for the programs under my watch. The Interactive Arts and Media Department has programs in Game Design, Game Art, Game Programming, Game and Immersive Sound, Applied Programming, Interaction Design, User Experience Design, Traditional and Computer Animation, as well as Cinema Visual Effects. It is quite a broad spectrum of academic areas but all are connected by linear or non-linear narrative and storytelling core concepts.

You’ve written music and done sound editing for movies and television, including work for Canal +, and for the films Lowlands, Night River, Por Amore, and Dustclouds. Can you talk about what it is like to work in the film music world?

Writing music for films has its own challenges compositionally but in today’s world of writing for film and television, at least in the local and Indie markets, it is wise to be able to produce a complete pipeline from the first note through to the recording process. This includes writing, orchestrating, recording, mixing, processing, and mastering the music for distribution to the producer/directors. Its sounds like a lot, but once the basics are understood a fairly good demo/final can be produced in a relatively short amount of time. Original composition is something I work at constantly but film music has a few tricks-of-the-trade that can make things a little easier. They are music theory and psychoacoustics based and can have a very influential effect on the part audience as well as reducing the time it takes to generate scores.

How did you decide to move to Western Springs? When was that?

When I came back from Europe, my wife became a medical resident in Chicago so that kind of pointed us towards the Chicago area. Once children came into the picture, we decided to put roots down in Western Springs after doing a very extensive search in the areas north and west of Chicago. We love the town. Schools are great and so are the neighbors.

Can you tell us a little about your family?

My wife, Monika and I have three children: Nastazja, Julia, and Joe. They are 17 and 13 respectively as Joe and Julia are twins.

You’re a frequent visitor to the Library. How does the Library and its materials and services–including interlibrary loan–fit in with your professional and personal life?

I love the library. Always have. The Boston Public Library was where much of my early compositions were composed. I could spend hours in the library, when I had that kind of time. Now the Thomas Ford Library acts as both a place for research and a meeting/studying place for my children. I especially like the network that the library is in. I rarely have to search outside the library system for things I need.

Finally, we must let our members know Dr. Cancellaro is also the published author Exploring Sound Design for Interactive Media (Design Exploration Series). Anything you’d like to say about writing that book?

I wrote that book a while ago for a couple of reasons. I wanted to write a book to explain the correlation between sound design and music theory. It appears on many levels in sound tracks and soundscapes so I wanted to help explain some of the magic going on behind the sound. I also wanted to write a book that students could relate to and be able to use in class at a relatively good price point. I am currently working on two more books: Non-linear Music Theory and Orchestrating through Film Scores. They are taking a lot of time, but I feel it will be worth it to finally get those ideas out.

I hope the library gets additional funding to continue its trajectory and expand into the AR (Augmented reality) and VR (Virtual reality) spaces.

“The Ford Member Connection” spotlights Western Springs residents with interesting stories and relationships to the Library. Please let us know whom you’d like to read about.