Thomas Albert Ford was born in Fownhope, England on January 9, 1864. He came to Western Springs about 1903 and was a building contractor who specialized in stone houses.

In August 1928 Thomas was in a New York subway accident. Legend has it that he was on his way to pick up steamer tickets for a voyage back to Britain. He died on September 3, 1928 of an infection from the injuries that he received in the accident.

Edith Ford was active in the formation of the Library, which at the time of Mr. Ford’s death was housed in a storefront on Grand Avenue. Seeing this as an opportunity to make a significant civic contribution to Western Springs, she donated property and paid for building the library named for her husband. The library building at Wolf Road and Chestnut Street opened in 1932.

Thomas and Edith Ford’s son, Newell, served as a Library Trustee for many years; in 1957 he was named President Emeritus of the Library in honor and recognition of the many contributions that the Ford family made to the library.

Additions to the building were completed in 1962 and 1996. In both cases, Lannon stone from a quarry in Lannon, Wisconsin was used for the library exterior.

Portraits of Edith and Thomas Ford hang in the library. A binder with newspaper articles and family history is available at the Reference Desk. 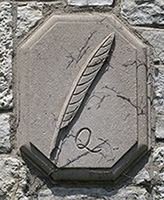 The Library was built in 1932 when symbolism was heavily used as a decorative feature and was a shorthand method of conveying meaning, and even the building’s business. For example, the Department of Agriculture in Washington D.C. proclaims its purpose with a facade festooned with cornstalks, fruit, and grains.

Our library is graced with the following symbols. Great care was taken when the addition was built in 1994-96 to replicate the original work so that the transition from the original to the new would be seamless.

It is interesting to note that Western Springs was known as “The Village of Churches”. Both the ship and the anchor have significance in the Christian faith with the former symbolizing knowledge and doctrine, and the latter stability for the soul. I do not know if there is a religious connection to the ones depicted on the Library but I would not be surprised to learn that that was also intended.