As Teen Liaison to the Board of the Thomas Ford Memorial Library and Senior at Lyons Township High School, Kylie Jabjiniak juggles many different activities and responsibilities. Find out more with this edition of The Ford Member Connection. 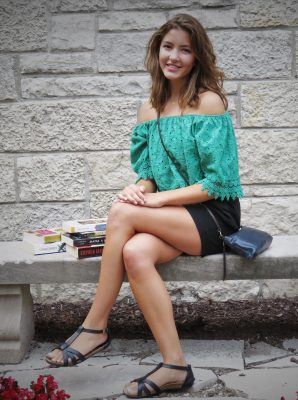 Let’s start with your connections to the Library. How long have you been a Teen Liason to the Board and what does it require?

This will be my second year as a Teen Liaison to the Board. The position requires that I regulate teen board meetings as well as report our discussions, events, and ideas to the library board at their monthly meetings.

The Spanish Conversation Group, a popular new program at the Library, was your brainchild. Can you tell us about that?

The Spanish Conversation Group was something I had wanted to do since my first year volunteering at the library. I have such a passion for language learning and I wanted to share that passion and create a new resource for the community to learn as well. It has been so amazing to see not only my own Spanish improve, but the progress that regular attendees have made after months of attending the group. We have also been fortunate enough to have native speakers attend and they have been invaluable in aiding our discussions and sharing their personal knowledge of different Spanish cultures. I am very excited about the French expansion in the fall, as the idea actually came from one of the conversation group members, and the atmosphere of language-learners is so fantastic.

You’re also active on the Library’s Teen Board, which is participating in Project Empathy.

Project Empathy is a worldwide project with the goal of providing online learning resources and materials to children in third-world countries. The project involves downloading information to portable disks and sending these disks to schools or libraries in target countries.

Any other comments about Teen Board ideas and programs?

I’ve been so fortunate to volunteer at Thomas Ford since all staff has been incredibly supportive of all Teen Board ideas and programs. It is such a unique opportunity to make a creative difference in the community. The Teen Board is always accepting new members and ideas, so to any young readers, know that you will always be welcome!

You recently told the Library Board that the Library is now an official member of The Human Library Program with teens building a foundation for the program through discussions with LTHS’s social justice club, advisors, and at summer volunteer sessions, with the goal of a fall/winter program launch. This sounds intriguing, can you give us an idea of what this will be about?

The Human Library Program is an event trademarked by a company headquartered in Denmark. Although these events have taken place all across the world, the Thomas Ford event is the first to be spearheaded by teen volunteers! The program is based around the values of empathy, open-mindedness, and curiosity. Screened volunteers share their own personal stories about difficult and often misunderstood issues such as poverty, immigration, or crime. The event is an opportunity for members of the community to ask questions and invoke dialogue with the “books” (the volunteers) in a safe and respectful environment as a means to facilitate positive connections and understandings surrounding issues and experiences that are misrepresented.

Speaking of Lyons Township, you’ll be starting your senior year this fall. Can you tell us a little about:

This summer, I studied abroad in Alicante, Spain on a four-week language and culture program through the company CIEE, so I lived with a Spanish family and took language and culture classes during the week. The experience was incredible, and I have grown even more inspired to continue studying languages and to keep traveling.

This year, I am still taking a pretty general set of classes, but, since I love humanities, I am most excited for my AP Spanish Language, constitutional law, and AP Comparative Government classes.

-Your involvement in Model UN

I have been involved with LT’s Model UN since my sophomore year, and I am excited to be on the club’s executive board this upcoming year. Model UN is an amazing club and is so helpful in developing crucial research, writing, and speaking skills that are useful in any career path.

I am applying for several colleges this fall and am very excited to pursue a degree involving languages, political science, and history.

You helped create “Music by the Fire” with the LTHS orchestra chamber group at the Library last December, and you’re a violinist. How long have you been involved with music? What would you like people to know about the importance of music in their lives?

I have been involved with music since I was nine years old when I started playing the violin. I have been lucky enough to be a part of the LT orchestra the past three years and tour Spain with them my sophomore year. I’d like for people to appreciate music and support the work of all artists–from painters to musicians to writers–since their contributions are often undervalued.

We know you’ve been a long-time volunteer at the Library. How long have you lived in Western Springs?

I have lived in Western Springs since I was eleven years old when my family moved from the suburbs of Atlanta, Georgia.

Do you have siblings? Pets? Anything else you’d like to say about your home life?

I do not have any siblings, but I do have two precious dogs–a Jack Russell Terrier named Lola and a husky mix named Harvey. My parents are very hardworking in both of their careers, and I am very fortunate to always have their support in pursuing my own goals.

Finally, not surprisingly, you’re an active reader. Take us out with a recommendation or two.

Since I love history, historical fiction is one of my favorite genres, and one of my all-time-favorites is The Nightingale by Kristin Hannah. It’s a novel set in World War II France centered on the different stories of two sisters during the war and their experiences surrounding the Nazi occupation and the French resistance. Kristin Hannah’s writing and character development are absolutely stunning, and I loved reading the sisters’ two different experiences, both of which offered a new perspective on civilians’ lives during the war.

Another recommendation I have is a historical fiction trilogy called And I Darken by Kiersten White. I loved these books because they focused on a time and area of history that I had never read about before in a historical fiction book; the plot centered around the heir to the throne in medieval Romania, known in history as Vlad the Impaler, who is more commonly recognized as the inspiration for Dracula. In the novel, Vlad is reimagined as a girl named Lada, and the three books follow her life, along with that of her brother, starting from their childhood when they were taken as hostages of the expanding Ottoman Empire.

“The Ford Member Connection” spotlights Western Springs residents with interesting stories and relationships to the Library. Please let us know whom you’d like to read about.