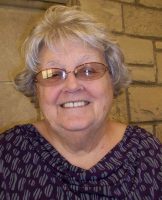 Bonnie moved to Western Springs in 1973 where her children Barbara, John, and Beth attended Grand Avenue, McClure and LT. She has four grandchildren. She was a Senior Systems Analyst before retiring three years ago.

She once was on a team that competed against other 7th and 8th graders on a radio program called Battle of the Books: “We were undefeated and won a TV for our school.” Today, she loves Agatha Christie, Rex Stout, Robert B. Parker, and many other mystery writers, as well as cooking and foreign travel.

A past 17-year volunteer at Field Museum, she currently serves on the boards of the Friends of the Oak Park Conservatory, Western Springs Library Friends, and Thomas Ford Library Foundation.

“I joined the Western Springs Library Friends in 1977 and their board in 1991. In 1992 I participated in the referendum awareness to the residents. In 1995 I was asked to join a group who thought the library needed a foundation. Now many years later I am still active and am proud of all the things that the Foundation and Friends have given over the years. I encourage all residents to actively support these two groups who provide programs and more that would not otherwise be available.”